By Amy Milka and Abaigéal Warfield (The University of Adelaide)

From hurricanes Harvey, Irma and Maria to earthquakes in Mexico and forest fires in California, in recent weeks the news has been filled with stories of the human cost of natural disaster. Now with at least two volcanos threatening to erupt in Indonesia, the media is once again scrambling to provide up-to-the-minute coverage. News reporting of disaster is instrumental in motivating charitable giving and pressurising governments, both local and international, to intervene. What’s more, the reports that have the most impact tend to pull on the heartstrings of viewers, presenting damage to homes and infrastructure, and also tales of individual bravery and tragedy. But at what cost?

Media scholars have long known that emotions heighten the impact of journalism. Despite this, there is still pressure to remain ‘objective’, and, as a result, emotions are embedded in reports in strategic ways, without the reporter themselves expressing emotional sentiments explicitly. Professor Karin Wahl-Jorgensen (the University of Cardiff) has defined this employment of emotions as the ‘strategic ritual of emotionality’.[i] In this way, journalists can ‘outsource’ emotions onto interviewees and use anecdotes to make objective reporting feel more personal. Wahl-Jorgensen envisages a careful journalistic process and an expertly crafted narrative which uses human interest to help the reader/viewer relate to a bigger issue.

But in the age of the 24-hour news cycle, journalists often report live from the scene, interviewing the recent victims of traumatic events, and news programs frequently show video or images of a ‘distressing’ nature. This raises issues regarding media ethics when covering disaster: how much do people need to see? What is useful, and what is it ethical to show? Does the media risk exploiting victims and eyewitnesses?

The Dart Centre for Journalism and Trauma addresses precisely these problems, advocating ethical and compassionate reporting of trauma and disaster. Hasty or incomplete reporting can often cause collateral damage to people who unwittingly become subjects of news. During coverage of Hurricane Harvey, for example, one CNN reporter was subject to an angry tirade from a woman who accused the media of being insensitive. This example led Paul Farhi to write an article for the Washington Post reflecting on news report standards in disaster reporting. Over 400 members of the public commented on the article. The top rated comment suggested that reporters should ‘not ask how someone feels after a disaster’. Instead, the commenter proposed that reporters ask

“if there is something that they would like to share so that people outside of the area can understand what is going on here. That gives the chance to just say that they cannot talk right now, or vent about all the reporters in their faces or to tell what happened to them.[ii]”

Another commenter pointed out the need for more compassionate reporting, stating that

‘it would do them well if they pictured loved ones, friends and neighbors when they’re seeing folks suffering in great tragedy, if only so they remember and show respect for the humanity of the people they interview’.[iii]

Journalists have a duty to present reports of trauma and disaster to the public, but ethics guidelines suggest that reporters should ‘show compassion for those who may be affected adversely by news coverage’. Likewise, news reports should avoid ‘sensationalist and short-termist media coverage which exhausts audiences in its relentless and unending parade of death and horror’.[iv] The drive to break news immediately puts pressure on journalists to balance impactful reporting with ethical concerns, and to consider the emotional vulnerability of their subjects and their audience, avoiding sensationalism. One possible solution is that journalists perform more emotional labour, abandoning the posture of impartiality in favour of that of a compassionate witness. Dr Mark Pearson, who spoke at our recent collaboratory, suggested that journalists could employ a mindfulness approach to help improve their work and ‘minimise the suffering it might otherwise inflict upon themselves and others’. 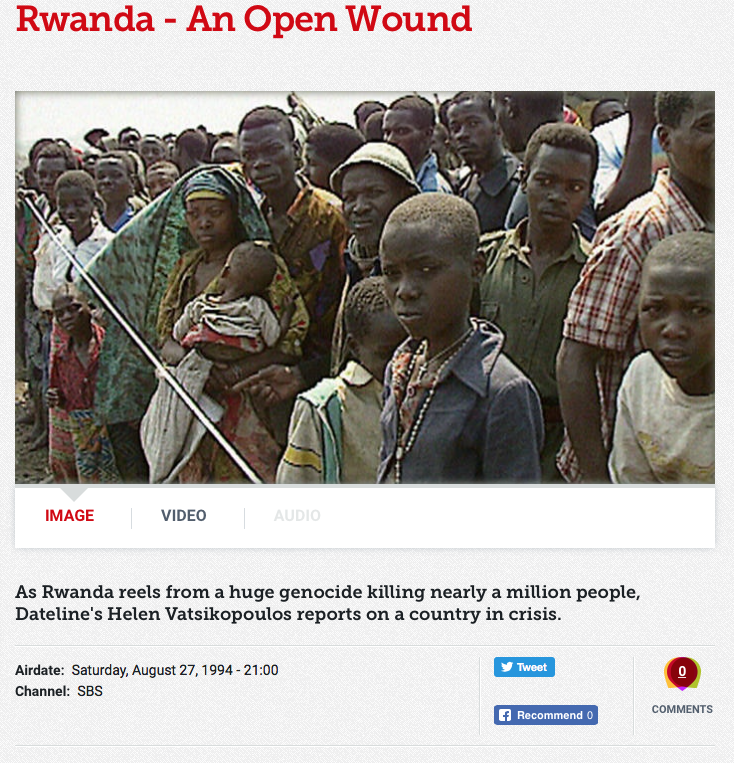 As we discussed in a previous blog post, emotional journalists run the risk of being seen as unprofessional or manipulative by some members of the public. But they are only human. In fact, new research pioneered by Dr Cait Mcmahon reveals just how important it is that journalists practice self-care too, as disaster reporting can also have an emotional, even traumatic, impact on their mental well being. During the collaboratory, Helen Vatsikopoulos shared her experience reporting on the Rwandan Genocide of 1994 when working for Dateline. Her paper highlighted how the experience of engaging with traumatic news reporting transformed the lives of all those involved in the production, including the videographer, journalist, editor and sound person. Thus, going forward, it is essential that the emotions of all affected by reporting are considered.

Another problem we face in this new media environment is that today’s journalists are now competing with citizen journalists. Wahl-Jorgensen and Mervi Pantti are nervous about the proliferation of amateur imagery that does not conform to the standards of ‘good taste and decency’, which in turn is shaping mainstream news media.[v] Even if professional journalists adhere to professional ethical codes, non-professional journalists don’t have to. How will citizen journalism impact the news industry? When disaster strikes, people look to non-traditional forums to get information, such as Reddit and Twitter. Distressing images and videos are often uploaded to these sites, as well as to Youtube and Facebook.

But how can journalists respond? Professor Charlie Beckett argues that there is a need for a networked journalism that deploys traditional journalism values within the setting of a transformed relationship with the public. According to Beckett, in his keynote paper delivered in Adelaide,

The answer is not to return to a mythical model with journalists as gatekeepers of objectivity, though some bastions of that model will remain. To retain the confidence and attention of the public journalism needs to go with the grain of human nature on social media.

One of the key conclusions reached at the recent collaboratory on ‘News Reporting and Emotions’ in Adelaide was that the new digital news media environment has brought new challenges to journalism: ones that necessitate a reconsideration of both ethical and emotional boundaries in journalistic practice. However, looking at journalism practice through a historical lens might illuminate how journalism has changed over time. It might remind journalists that emotional and professional standards are always shifting, and that change is possible, and sometimes necessary.

Amy Milka is a Postdoctoral Research Fellow in the ‘Change’ program of the ARC Centre of Excellence for the History of Emotions, based at The University of Adelaide. Her current research considers the affective language of the courtroom in English criminal courts, 1700–1830. Amy is a convenor of the Centre’s ‘Emotions and Media’ research cluster.

Abaigéal Warfield is a Postdoctoral Research Fellow in the ‘Change’ program of the ARC Centre of Excellence for the History of Emotions, based at The University of Adelaide. She is working on a project exploring how fear was constructed in early modern German news pamphlets and broadsides, specifically fear of the Devil and of witches. Abaigéal is a convenor of the Centre’s ‘Emotions and Media’ research cluster.