By Umberto Grassi, The University of Sydney

‘This Is Not Art’ – TINA – is an art festival that has taken place annually in Newcastle, Australia, since 1998. Each year, the event attracts thousands of people, holding art exhibitions, performances, workshops and public debates that discuss visual and performative arts, writing and critical thinking. In my capacity as a scholar specialising in the history of emotions and transgressive sexualities, I joined a 2016 TINA panel titled ‘TRANSGRESSIONS’, in which Australian artists and academics were invited to discuss the politics and representation of masculinity and femininity in contemporary art. Combining artists and academics, and including a premodern historian to comment on contemporary art, was a challenge, but the lively debate that followed the roundtable presentations showed the extent to which the experiment worked.

The panel opened with the screening of artist and filmmaker Frazer Bull Clark’s The Big Shave, a collection of short clips of men shaving. Aside from being a gem for cinephiles, by elegantly showcasing more than 80 years of cinematic history, the piece interrogates this exemplary ritual of masculinity. It shows the cultural constructs that have shaped social performances of masculinities over this period, by portraying a variety of representations of virility ranging from hyper-masculine to counter-cultural characters. Furthermore, insofar as also the act of being shaved is represented, the video allows us to reflect on the ambiguous emotional relation between the social control men historically has exercised over women and the – related? – vulnerability symbolically represented by offering their naked throat to a razor held by someone else’s hand.

‘WOMEN ONLY WRITE ABOUT THEMSELVES’

for all the tribe. Applaud their verses’ muscle!

The female “I” is narcissistic. Facile.

It’s all we need.

This poem, published in the online and in print literary journal Rattle, was quoted in Kathryn Hummel’s talk. A social sciences researcher and author of award winning non-fiction poetry, Hummel analysed how gender stereotypes influenced both the act of writing poetry and literary criticism. Her poetic work proves that the attitude to critical thinking acquired through academic research can successfully foster other forms of expression. Hummel presented an interesting and profound analysis of the different emotional regimes that have historically shaped the universes of male and female poetry, uncovering the unbalanced relations of power that have crystallised them in two closed off realms. An established canon reads female poetry as lyric, autobiographical and confessional in tone; that is, as a negative, unwelcome exaggeration of the emotions that are meant to be attached to ‘female nature’. Questioning this essentialist understanding of femininity, and its residues both in sexist stereotypes and in feminist discourses, Hummel proposed a series of readings that aimed to question this binary by focusing on unruly femininities, vulnerable masculinities, negotiations and reconciliations of essences, fluidity and exchange, and dialogue.

‘A brush has its own pulse to record and amplify.

A pen has its own rust. Paint and beer require

I think to wet my page the same.’ 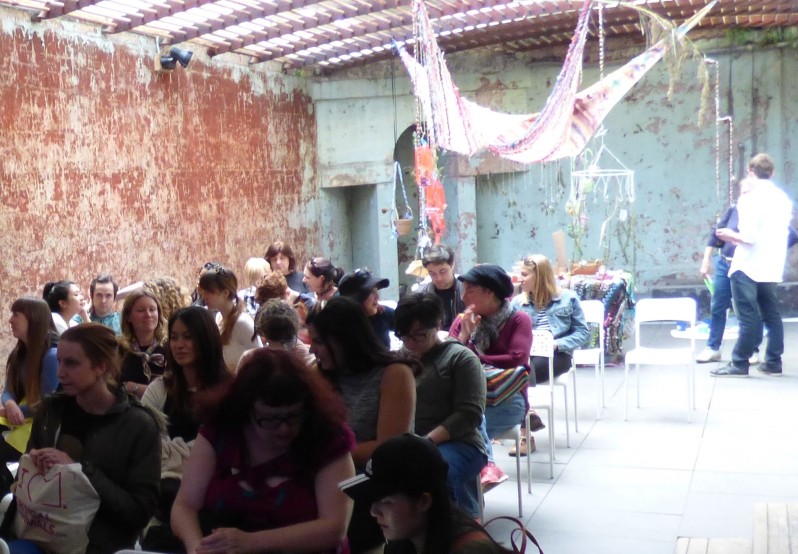 ‘I loved the experience of being in this totally other concrete world, a world […] where body hairs were the norm, where [girls] shouted, and were messy, and made mistakes’

These lines from Chiara Grassia’s presentation introduce us to her work. A writer, musician and art producer, Grassia discussed the mutual interactions between her training as a sociologist and her experience of being a volunteer at Girls’ Rock Camps in the US. She described the thrilling experience of living in a free space in which girls were never expected to overcompensate or to apologise for messing up or overstepping whatever boundaries they had been taught not to cross. This experience affected her approach to sociology, causing her research to shift from the interpretative paradigm of ‘social change’ to focus instead on ‘transformative spaces’, which affords more room for hope, action and utopia.

Phil Soliman is a Sydney-based art performer, whose work has been recently centred around the history of Egyptian society and how it intersects with his sexual identity and experience as the son of Egyptian immigrants in Sydney. ‘Unnatural’, Soliman’s exhibition at TINA, examines the collective madness that social media often makes manifest by representing the painful experience of homophobic insult in a youtube video. The short clip also contains reference to his biography, thus taking a further step in a personal and artistic trajectory in which the exploration of identity, arts and politics have always been inextricably linked.

Phil Soliman’s project has much in common with my research. ‘Unnatural’ is in part the result of us knowing each other and discussing our reciprocal interests. Phil and I met at a queer event in Sydney last February. As soon as we started to talk about our work, we realised that we are dealing with the same problems, even though we are looking at them from different perspectives. My research within CHE investigates the relationship between religious identities, cross cultural interactions and sexual transgressions. One of the key elements that is reflected in both Phil’s work and my own is the role played by insults and stereotyping in shaping sexual identities. Historical research has revealed how, in a normative and repressive context, the creation of negative categories (such as the sodomite, the tribade, the invert, the pederast, the hermaphrodite) has also contributed to the foundation of identity-making processes. No matter how negative it was, such negative categorisation opened up a creative dialogue, stimulated resilient responses and fostered creative and humorous re-appropriations. The way in which homophobic insults are still ironically used within gay communities across the world is living proof of an attitude rooted in a distant past. The real issue that is at stake here is the relationship between conflicting emotional regimes in a given society, and the role played by this conflict in shaping individual identities. As Monique Scheer has pointed out, in our lifetime we engage with a multiplicity of different communities and institutions (family, village, neighbourhood, school, church, the military, political parties and so on) and ‘the habitus of each individual is […] “a unique integration” [ii]. Each society contains multiple, and often conflicting, cultures and subcultures. A habitus – Scheer goes on – ‘may conflict with changing social environments, and its equally likely that friction will ensue when actors/bodies enact cultural scripts out of place. The plurality of practices suffices to explain historical changes and shifts because they collide with one another, causing misunderstandings, conflicts, and crossovers between the fields’[iii].

Furthermore, ‘Unnatural’ has made me aware of the role played by the materiality and technicality of communication tools in the development of historical processes. I realise that I have probably underestimated the influence of media in my research. The problems raised by Phil’s project have triggered a chain of questions that are able to stimulate new research: How have innovations in media influenced the history of sexuality? How has the introduction of the press, the increasing pervasiveness of defamatory pamphlets with explicit sexual content, the circulation of prints portraying erotic subjects, and other material objects recalling sexual allusions contributed to the construction of sexual identities and gender roles? Although these questions are not alien to the historical research on sexual and gender transgressions in the early modern period already carried out by scholars, a lot of work still needs to be done in order to write a comprehensive history of the relation between the development of communication tools, past sexual epistemologies and concrete sexual behaviours in the early modern period.

In view of the above, without a doubt we can conclude that the collaboration between academic research and contemporary art at the TINA festival has proven fruitful. The positive reaction of the audience proved that thinking historically still provides timely responses to a widespread need for meaning, particularly when it comes to discussing conflicts between religious and sexual identities, and the complex emotional reactions that are still associated with the controversial relationship between faith and the quest for sexual freedom.

Umberto Grassi is a postdoctoral associate researcher at the Sydney node of the ARC Center of Excellence for the History of Emotions (directed by dr. Juanita F. Ruys). His project is part of the Meaning program, led by professor Andrew Lynch.

Grassi graduated (MA) in Early Modern History in 2002 at the University of Pisa. His dissertation focused on the control of sodomy in Early Modern Italy. Grassi continued studying this topic as a PHD student, under the supervision of prof. Adriano Prosperi. His PHD thesis was awarded within a LGBTQ studies contest, and it has been published in 2014. In 2012 Grassi joined the FIRB project “Beyond the Holy War”, as a research fellow based at the Scuola Normale Superiore of Pisa. Focused on the interactions between Christians and Muslims in the Early Modern period, the project included other Italian Universities (La Sapienza of Rome and the University of Palermo), and promoted cooperation with renowned international research centres.

Garssi is currently part of EMoDiR (Early Modern religious Dissents and Radicalism), an international research network focused on the study of religious dissent across Europe. The group brings together a variety of research projects on the cultural and social history of religious dissent in early modernity (www.emodir.net). He is also a member of the research centre of Gender and Sexuality Studies Politesse (Politics and Theories of Sexuality), based at the University of Verona, which is today a pioneering experience in Italy (http://www.politesse.it/).

[ii] Monique Scheer, ‘Are Emotions a Kind of Practice (And Is That What Makes Them Have a History)? A Bourdieuian Approach to Understanding Emotion’, History and Theory 51 (2012), p. 204.