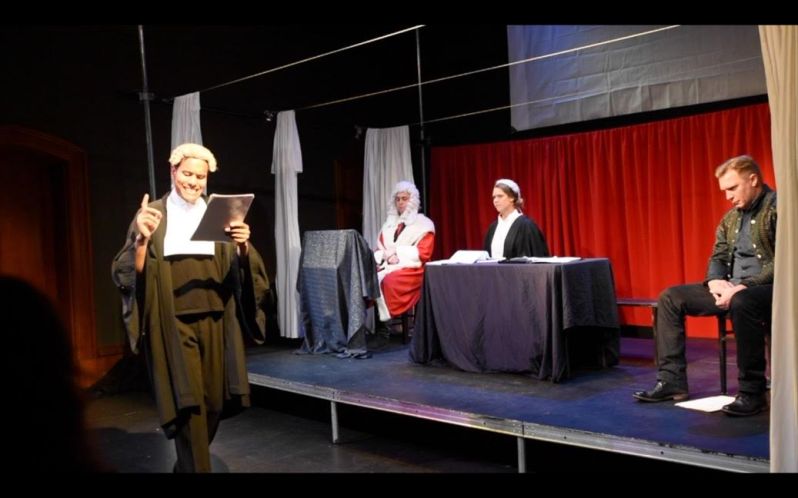 Othello on Trial (or the Tragedy of Desdemona, the Wife) is the first play in a planned Theatre in Education trilogy. Born of fatigue with indifferent or disavowing academic audiences, the project is designed to engage what Edward Said called the ‘extra-academic outside world’, especially young people, in conversations about gendered relationships in western societies today. The focus is on continuing high levels of men’s violence against women and girls.

Utilising Shakespeare’s Othello, his uncannily timely drama about a man’s homicidal rage against his wife, Othello on Trial dramatises the cultural questions raised by a shocking crime statistic – one woman is killed each week on average by a male partner or former partner in Australia.

The play was most recently performed at La Mama Courthouse Theatre in Melbourne in May 2016. Funding from the Victoria Law Foundation and the Australian Research Council Centre of Excellence for the History of Emotions supported the expansion of the cast to include four professional actors and four secondary school students aged 14–18 years playing cameo and juror lines. This was an important transitional moment that progressed the project towards the full-student cast that a Theatre in Education project seeking active student participation and engagement requires.

Weaving scenes from Othello, Shakespeare’s only play featuring an ‘infidelity’-inspired wife killing, with excerpts from historic and contemporary trials of wife killers, Othello on Trial showcases provocation by infidelity as a deeply ingrained cultural excuse sanctioned by law for wife-killers. Othello is put on trial for murder, with the audience taking the role of jurors in Act 3 which doubles as an open forum to discuss the key issues. Should extreme emotions – ‘being wrought/Perplexed in the extreme’ as Othello puts it (‘seeing red’ as modern-day wife-killers put it) – mitigate murder? Is it past time to question culturally based excuses for men’s violence?

Emphasising the critical importance of primary prevention and attitudinal change, the play targets the continuing salience of culturally mandated excuses for hurting and killing women – she was unfaithful, she disobeyed. The underlying assumption is that effective interventions against violence against women need to be pitched in an accessible way before sexist views become entrenched. Early educational interventions that engage young people, I argue, are the key. 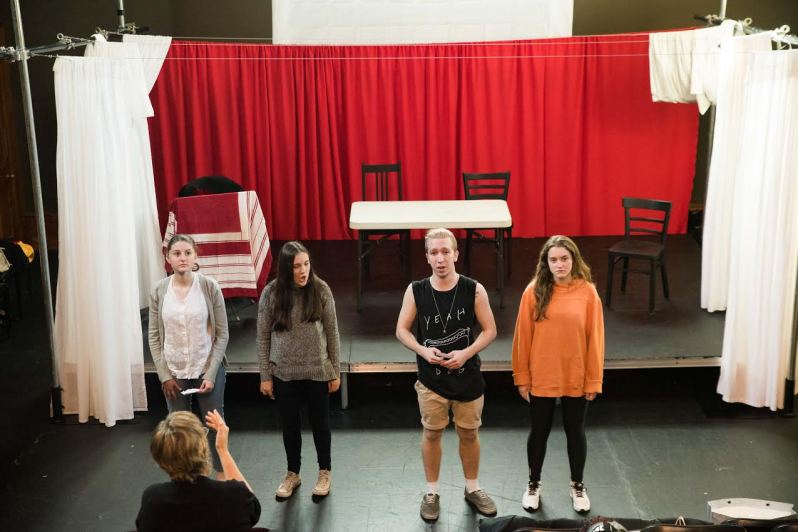 The performances will be accompanied by educational materials that provide a springboard for people to discuss gendered relations at an interpersonal and social level. Opportunities are provided for them to participate – as performers, jurors and post-performance discussants – in order to facilitate their active participation in the national and global movement to prevent violence against women.

Why a Theatre in Education Project?

Transformational educational resources that confront sexism via an experiential learning process are essential for challenging unexamined deeply held beliefs about men’s propriety rights over women. Theatre is a well-established means of developing innovative cultural interventions, providing a space for experimenting with new ideas and behaviours. As research on the use of theatre in sex and relationship education in the UK has shown, active exploratory participation, a central plank of this Othello project, is vital to ensure young people’s interest and engagement with important social issues.

The master of exploring human fallibility through archetypal characters, notably the jealous and possessive husband, is the perfect vehicle for challenging victim-blaming cultural scripts that excuse men’s violence. In play after play, from The Merry Wives of Windsor to Much Ado About Nothing, Othello, Cymbeline and The Winter’s Tale, men’s murderous rage against women is queried and parodied mercilessly.

Othello on Trial utilises key passages from Othello that foreshadow the legal defences that would be deployed by wife-killers over the next 400 years. These extraordinarily prescient passages are woven together with citations from criminal cases to set up the arguments for both prosecution and defence in Othello on Trial.

In Teaching Shakespeare with Purpose: A Student-Centred Approach,[1] Ayanna Thompson and Laura Turchi argue that the teaching of Shakespeare is ‘a vehicle rather than a destination’ and this is all the more so when the play in question is not one of his plays but rather one that puts one of his most famous characters on trial. Further, they suggest that Shakespeare’s plays be utilised as ‘vehicles for collaborative exploration’ via the development of intentional and delimiting ‘frames’. ‘Losing control’, one of the frames they suggest for reading Othello, is precisely the frame deployed in Othello on Trial to query the notions of ‘seeing red’ and ‘hot-blooded’ murder.

As Thompson and Turchi also suggest, theatre-based classroom techniques are needed that acknowledge diversity in the classroom and query assumptions about Shakespeare’s universality and colour-blindness. To ensure dialogue about identity – raced and sexed identity – Othello on Trial addresses explicitly the pivotal race question in Othello as well as the cultural specificity of excuses for intimate partner homicide. In order to highlight the semiotic and political significance of race in Shakespeare’s play, Othello on Trial also deploys casting models where the actors’ race and gender are clearly framed and their differences highlighted so that the play can be translated to different cultures and locations.

Crucially, the collaborative student-centred learning that the play aims to provide entails that these casting models are openly discussed by the casts and audiences, but without losing sight of the problematic conceptualisation of ‘crimes of passion’, a crime committed overwhelmingly by men.

In Act 3, the audience is invited to determine Othello’s fate by convicting him of either murder or manslaughter, thereby opening up a conversation about whether Othello should retain his conventional status as tragic hero, ‘the noble Moor’, or whether that depiction should be contested today; whether indeed it is challenged in Shakespeare’s play itself, let alone in the many feminist-inspired late modern law reform movements that have opposed culturally based excuses for all wife-killers, whatever their ethnicity. Who, ultimately, is the tragic figure:, the impassioned killer or his victim? Where do late modern sympathies lie? Can there be a better site to query the cultural foundations of sympathy for modern day wife-killers than Shakespeare’s astonishing problematising of ‘passion’ as excuse for wife murder 400 years ago? 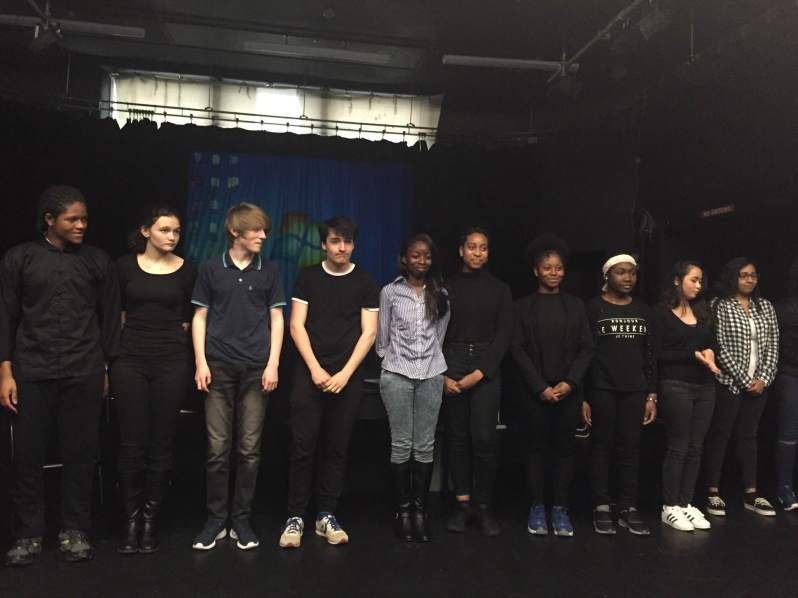 The play was first performed as a rehearsed reading in London in November 2014. It was then performed in Melbourne in March 2015, funded by the Victoria Women’s Trust, and in London in November 2015, funded by Queen Mary University of London’s Law School and Centre for Public Engagement. Over 200 East London school students attended the Queen Mary performances. Their feedback, overwhelmingly positive, and the London performances are discussed in my photo journal article, ‘Othello on Trial – Engaging with the “Extra-Academic Outside World”’.[2]

Following the most recent performance in Melbourne in May 2016, the play is now being developed in the UK. It is currently being rehearsed by an all-girl all-black East London school cast for a performance at their school in July. Hopefully, more performances will follow at other London schools, thereby continuing this Shakespearean-inflected engagement with the extra-academic outside world.

Dr Adrian Howe wrote ‘Othello on Trial (or the Tragedy of Desdemona, the Wife)’, which played at Melbourne’s La Mama Courthouse Theatre from 15-17 May, 2016. This project has been developed with assistance from Fitzroy Legal Service and was funded in 2016 by the Law Foundation, The University of Melbourne Centre for Public Engagement and the Australian Research Council Centre of Excellence for the History of Emotions.

For information about the writing and performance of Othello on Trial see Adrian Howe:

For information about legal scholarship and law and Shakespeare scholarship that informs the writing of Othello on Trial, see Adrian Howe: