Shakespeare as performed on the eighteenth-century stage was arguably more emotional than the Shakespeare we know now. Once the English theatres reopened in 1660 (following their closure during the Civil War and Interregnum), playwrights took the opportunity to revise Shakespeare’s works for new audiences, new theatre spaces and new actors (women being allowed to perform on stage for the first time). Many of these adaptations held the stage until well into the nineteenth century, so emotional Shakespeare was the primary way in which the works were staged for many years.

One of the most fascinating elements of these adaptations is the way in which they alter and even augment the emotional impact of the plays. In 1681, Nahum Tate gave King Lear a new ending in which Cordelia remains alive, marries Edgar and is left to reign over the kingdom. Lear is spared the pain of losing his daughter and he survives too. Thus joy replaces sadness at the play’s denouement.

Thomas Otway’s Roman adaptation of Romeo and Juliet, entitled The History and Fall of Caius Marius (1680), has Juliet awaken in the tomb in order to exchange some tender parting words with Romeo before she dies. The most influential actor, manager and adapter of the eighteenth century, David Garrick, followed Otway in including this romantic scene in his version of the play (first performed in 1748). A painting by Benjamin Wilson depicts Garrick and his stage partner, George Anne Bellamy, at this precise moment: Romeo steps back in amazement as Juliet awakes to gaze longingly at him. Critic Francis Gentleman approved of the alteration and acknowledged its emotional impact, writing that the scene gave “an opportunity of working the pathos to the tenderest pitch” (Francis Gentleman, note on Romeo and Juliet in Bell’s Edition of Shakespeare’s Plays, 2nd ed., 5 vols. (London, 1774), vol. 2, p. 148.) 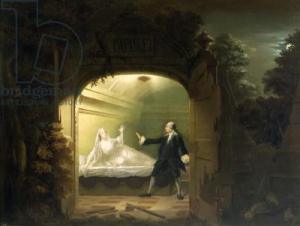 Image: “David Garrick and George Anne Bellamy in Romeo and Juliet”, 1753 (oil on canvas) by Benjamin WillsonThe heightened emotion prevalent in eighteenth-century performances of Shakespeare’s plays was readily replicated by the audience. There are several accounts of women weeping in response to what they saw on the stage. In 1756 Frances Brooke took a group of young women to see King Lear and noted both the copiousness of the tears they shed and that their response was shared by other audience members: “I had the satisfaction of finding we were accompanied in our tears by almost the whole house”(Mary Singleton [Frances Brooke], The Old Maid 18 (13 March 1756), new edn. (London, 1764), pp. 144-50 (p. 146)).  Men joined in too. James Boswell wrote of going early to the playhouse to see Garrick act in order to get himself into the right frame of mind to watch the performance, that is, to facilitate being emotionally moved by it. He recorded his verdict of this experience: “Mr. Garrick gave me the most perfect satisfaction. I was fully moved, and I shed abundance of tears” (James Boswell, 12 May 1763, Boswell’s London Journal, 1762–1763, ed. Frederick A. Pottle (London: Book Club Associates, 1974), p. 257).

These public displays of emotion were facilitated by the fact that it was not possible fully to dim the house lights in theatre auditoria at this time. Playgoers could thus easily read emotion on the faces of other audience members, which allowed feelings to circulate readily in the theatre. Our modern audience experience, which predominantly involves sitting in darkened theatres, significantly shuts down the possibility of the kind of emotional community that was readily available to eighteenth-century playgoers and which the period’s adaptations of Shakespeare facilitated.

For more CHE research on Shakespeare performance,  see Dr Penelope Woods on “Feelings in the Room: Theatre Audiences and their Emotions,” Dr Robert White on “Shakespeare in our World,” and Dr Glen McGillivray on “Forms Forced to their Conceit: Semiosis and Affect in Eighteenth Century English Acting.”