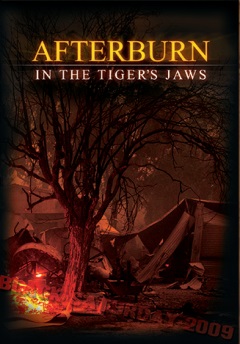 Filmed over three years, Moira Fahy’s remarkable documentary, Afterburn: In the Tiger’s Jaws, offers extraordinary insights into the emotional journeys of bushfire survivors. Framed by a quote from Lewis Carroll’s Alice in Wonderland, the work explores how the world can become uncanny and unrecognizable when catastrophe strikes.

The small rural village of Steels Creek was ravaged by fire on February 7, 2009, the day now known as Black Saturday. As is well known, 173 people died in Victoria on that day and more than 4500 square kilometres of land were burned. In the Steels Creek community, ten people were killed and sixty-seven properties destroyed in a fire from Kilmore East that most residents believed would never reach them.

Initiated by Jane and Malcolm Calder, one of the three couples whose stories are woven together in this astonishingly beautiful film, Afterburn is, as Libby Robin has noted, a very important part of the healing process for the Steels Creek community. In addition to the Calders, the documentary tells the stories of Edd and Amanda Williams, who watched their ecofarm and bed and breakfast business burn to the ground, and Rob and Julie Fallon, who left Steels Creek belatedly on the day of the fire with their two young children. In addition to losing their home, the Fallons lost two sets of neighbours, very dear friends who decided to stay and defend their properties, and who were burned to death when the fire roared through the valley.

Interlaced with moving accounts of the different types of grief, pain and trauma experienced by each of the couples, are contributions from three experts. Their input offers valuable contexts for understanding the history of fire in the region, the trajectory and destructive force of a bushfire, and the many pressures that accompany survival. Fire historian Tom Griffiths draws important yet sensitive parallels with the deadly bushfires of 1939, commenting that, ‘the most haunting aspect of this tragedy is its familiarity’, while reminding us that ‘fire always returns to the same place’. Peter Stanley, a social and military historian, offers a vivid account of the trajectory of the Black Saturday Fires across the landscape, which is accompanied by footage from the day, while psychologist and disaster expert Rob Gordon provides an overview of the physical and mental pressures that each of the survivors will endure in different ways.

Each family deals with the fire in its own way. The Calders hurl themselves into community work, but to begin with, take little time for themselves. The Fallons decide to leave Steels Creek and, in quick succession, purchase both a unit and a camper van, embarking on an extended trip across Queensland, before settling down in a new home. Julie Fallon speaks movingly of her grief at the loss of the ‘simple bush life’ she had wanted for her children, while her husband Rob talks with great regret about their tremendous losses when he says, with great pathos, that having lost both home and friends, ‘we would look to the bush for identity, but that’s gone too’. The final couple, Edd and Amanda Williams, set to work to rebuild the home and business that they have lost, creating an underground fortress, designed to withstand the onslaught of any future fire.

Charting the passage of time and milestones in the recovery process with haunting shots of the landscape and its regeneration, Fahy sets up a beautiful contrast between the natural world’s swift renewal and the much slower recovery of the delicate human beings, whose lives have been redefined by the fire. Rob Gordon’s commentary is valuable here, as it explains the protracted emotional and physiological toll of rebuilding, outlining in particular how adrenaline can save us when we are faced with an immediate threat. Prolonged exposure to adrenaline, however, leaves us trapped in a survival mode, which then hinders our ability to get on with everyday life. In particular, Gordon points to survivors’ frantic attempts to re-assert their old lives through hard work and rebuilding, before outlining the emotional slumps that they experience in trying to do too much, too soon.

Events like natural disasters can, according to Rob Gordon, trigger the re-emergence of past traumas, forcing survivors to confront incidents from their lives that were never resolved. Some of the Steels Creek survivors featured in Afterburn find themselves reliving previous ordeals, while others find that, having pushed their bushfire experiences to one side, they suddenly catch up. Jane Calder speaks of suddenly becoming very tired (which, Rob Gordon explains, is part of the replenishment of reserves that will allow survivors to go on), while Amanda Williams observes, towards the end of the film, that it has taken two years for her to allow herself to grieve, particularly for the loss of her dogs.

Roger Newcome’s narration brings Moira Fahy’s elegant script to life, setting the tone for a subtle, thoughtful journey through devastation, sorrow and fortitude. The stories are concluded with a bittersweet mixture of success and numbness, while Rob Gordon warns that recovery has to be about much more than building a house or creating fortifications.

Afterburn is a profoundly moving piece of work and perhaps the words that reverberate through it most strongly are those of Tom Griffiths, who warns that, ‘Fire is something that we have to live with, not triumph over’. Moira Fahy’s outstanding film reveals the paradoxical combination of resilience and fragility that make us human, with her delicate touch allowing the three families to tell their own stories. Touching and inspiring, Afterburn has much to teach us about the emotional process of learning to live with fire and its destructive power.

Afterburn is part of a bigger bushfire recovery project in the Steels Creek community, details of which may be found here: http://steelscreek.vic.au/publications/

Professor Tom Griffiths of ANU has written about the emotional background to Afterburn here: http://history.cass.anu.edu.au/monthinhistory/afterburn-emotional-legacy-bushfire

Another film by Moira Fahy about the 1939 bush fires, ‘Black Friday’, may be viewed here: www.abc.net.au/blackfriday/